Wooded areas
Buildings, or proctected areas from the cold 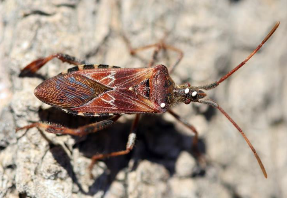 The Western conifer seed bug has become a nuisance pest in the Northeast. The bug has the habit of entering buildings at the onset of cold weather in the late summer or early fall as it seeks a protected site to spend the winter. These bugs do not bite or sting, nor do they cause damage to the home. They will, however, give off a pungent odor if you handle them, which is part of the insect's defensive strategy. They also may make a buzzing sound when flying. The range of the western conifer seed bug has been expanding.

In 1992 we began to get reports from western New York State about these rather large insects in homes. The first documented collection of this species in New York State was from an Orchard Park (Erie County) home in January 1990. By February of 1992 Dr. Wayne Gall of the Buffalo Museum of Science had received specimens from 9 counties of western and central New York. By 1994 we were seeing samples from Long Island and the lower Hudson Valley region. It is now found throughout the state. This species was first described in 1910 from California, and was reported in Iowa in 1956. By the 1970's it was established in Wisconsin and Illinois, and by the mid-1980's was found in Minnesota, southeastern Michigan and southwestern Ontario.

The western conifer seed bug belongs to the family Coreidae, commonly called leaf-footed bugs, and like many members of this family, it has a flattened, leaf-like expansion on the hind legs. The adult is about 3/4 inch (16-20 mm) in length and is dull brownish. There is a faint white zigzag stripe across the midpoint of its upper surface. When the insect takes flight, it lifts the wings to reveal bright yellowish orange areas on its back.

These bugs use piercing-sucking mouthparts to pierce the scales of conifer seeds and suck out the seed pulp. The list of host plants includes white pine, red pine, Scotch pine, Austrian pine, mugo pine, white spruce, Douglas fir and hemlock. Often these trees are planted or are growing near homes, and if that is the case, the bugs may seek the nearby buildings as an overwintering site. In spring these bugs move out of doors to coniferous trees nearby. The bugs feed on the developing seeds and early flowers of different species of conifers. Females are reported to lay rows of eggs on needles of the host trees, which hatch in about 10 days. Young nymphs then begin to feed on tender cone scales and sometimes the needles. The nymphs are orange and brown, becoming reddish-brown to brown as they develop. Nymphs pass through five stages and reach adulthood by late August. Adults feed on ripening conifer seeds until they seek overwintering quarters.