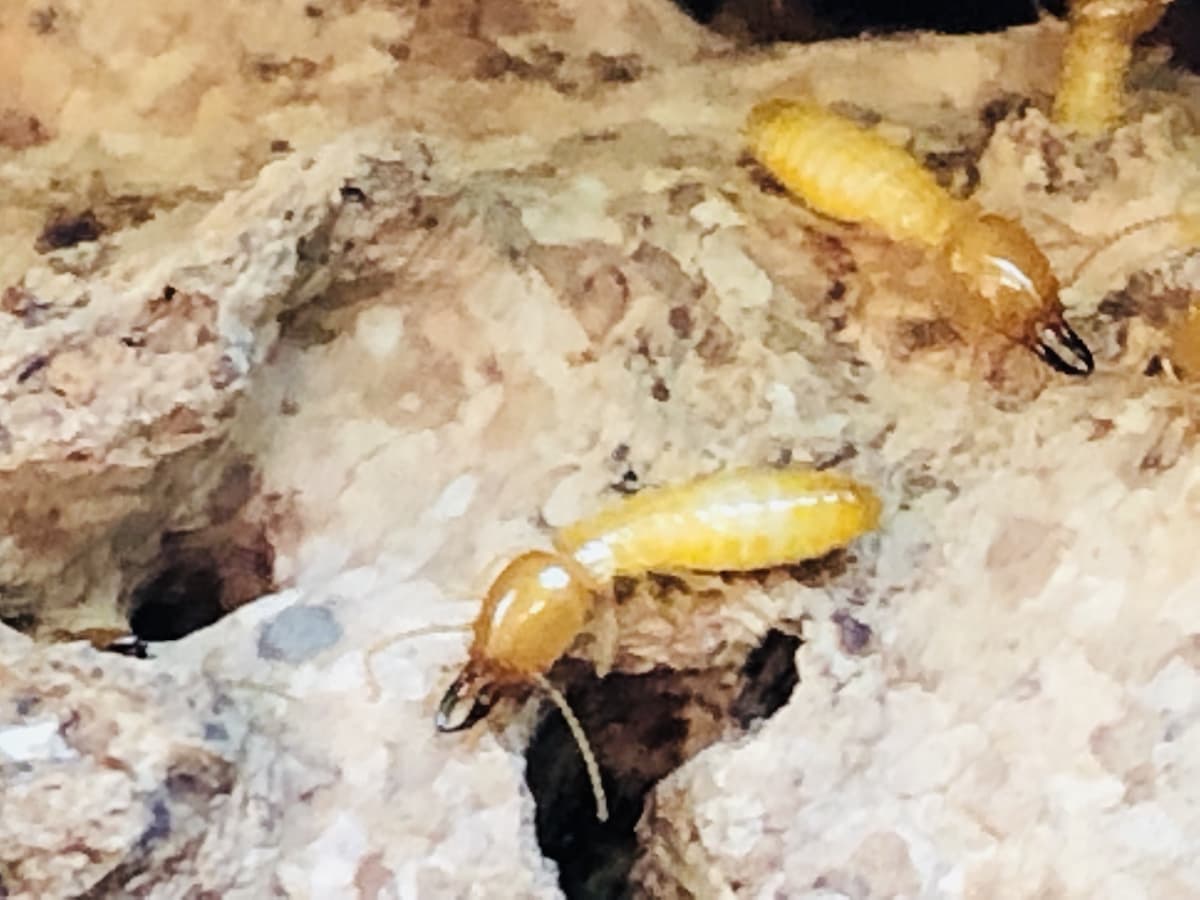 The Eastern subterranean termite is the most common and widely distributed termite in the USA, commonly found from southern Ontario, in all eastern states of the USA including Texas.

Eastern subterranean termites have acute survival instincts. If they are shaken up or disturbed, the termites often will abandon the associated area and move on to secretly cause damage in other areas in the building. If you find eastern subterranean termites in or around your property, it is essential that you do NOT disturb them and promptly arrange for a professional inspection and application of a termite bait to the live termites, if present in abundance.

Identification of Swarmers and Soldiers: Swarming generally occurs during the spring but occasionally a few smaller swarms may occur during the summer. Swarming most often occurs during the morning following a warm rain shower whereby the soil temperature is around 70°F. Eastern subterranean termites, Reticulitermesf lavipes (Kollar), are present throughout New York and Pennsylvania and often damage structural timbers in buildings. When this damage becomes evident it is usually the result of years of infestation.

Thus, damage by termites is not a sudden onslaught that will cause a building to collapse in a few days. Generally, termite problems only occur some years after construction—usually 10 years or more. Many houses are unlikely to ever have termites because they are either located where the risk from termites is low or they are constructed to resist termite infestations. The risk of infestations can be reduced by avoiding certain faults or errors in construction, site grading and maintenance, or controlled through the application of soil insecticides or baits.

The presence of swarming termites or their wings alone is a sure sign that termites are working in a building. Winged termites are often confused with winged ants. Most species of ants in the house are only nuisances and, except for carpenter ants, do not damage wood. For this reason it is necessary to know the differences between

winged termites and winged ants. The easiest way to distinguish the two groups is to look at their waists. An ant has a narrow, wasp-like waist; a termite has a broad waist. The antennae or feelers of ants are L-shaped, whereas those of termites are straight. Furthermore, the four wings of termites are of equal length and nearly twice as long as the termite body, while ant wings are approximately equal to the length of the ant, and the fore and hind wings are of unequal length.

Signs of the Presence of Termites

Wood attacked by termites has runways or passages that are coated with an earth-like material glued to the wood. Where the wood has been infested for some time, it may be largely hollowed out with passages and may be rotten in appearance. Upon probing such wood with a screwdriver or similar tool, many of the hidden worker termites may spill out. Another sign of termites in the house is the presence of termite tubes. Termites make these earth-colored tubes for a number of reasons, primarily as a protected runway from the earth to the wood they feed on. Moreover, these tubes may serve as swarming exits for the winged termites. Look for these tubes on the cellar walls, on wooden posts, wall studs, mudsills, and door and window trim. Wood embedded in earth or in concrete cellar floors is especially susceptible to termites.

Within a termite nest there are members of different castes, each with a different role to perform and all interdependent upon each other for survival of the colony. These include the queen, king, the winged reproductive (young kings and queens), soldier and worker termites.

The queen termite is an egg laying machine; her body is enormous compared to her off-spring; she can live more than 25 years and produce more that 2,000 eggs a day. The king and queen live in a central chamber and are tended by the workers.

The soldiers are the defenders of the colony, particularly against marauding ants - with whom they have engaged in a relentless war lasting 250 million years. The soldiers have an orange colored rectangular armored head with mandibulate pinchers which they use to crush the ants. On their forehead is a fontanelle (frontal gland pore) used to emit a sticky latex to ensnare the ants. Its mandibles are curved at about 70~90 degrees. The body of the Eastern subterranean termite is flat and almost as wide as the head, with the width of approx 1/32”.

The workers are by far the largest caste in the eastern subterranean termite colony and the one that does the damage; they are a creamy translucent color, soft bodied and carry out all work in the nest, including gathering food (timber and other cellulose); constructing tunnels; repairing and enlarging the colony nest; grooming each other and feeding the soldiers, the king, queen and also caring for the young nymphs until mature.

Only the worker termite caste can digest timber by the use of symbiotic protozoa in their gut. Worker termites feed their partly digested semi-liquid food, regurgitated from their mouth or passing from their anus, to the other termites, a process known as trophallaxis.

Termite control: Control of termites in a building can involve structural alteration and/or the application of an insecticide or bait registered for use in controlling termites. Either method when used alone may provide the desired results, but the most satisfactory results are often obtained when the two methods are combined.