Range in color from pale yellow-orange to bright red-orange, with or without black spots on the elytra, or wing covers
Head, antennae, and mouthparts are generally straw-yellow but are sometimes tinged with black
Pronotum is similarly straw-yellow with up to 5 black spots or with lateral spots usually joined to form 2 curved lines, an M-shaped mark, or a solid trapezoid
Wing covers are generally yellow-orange in unspotted individuals 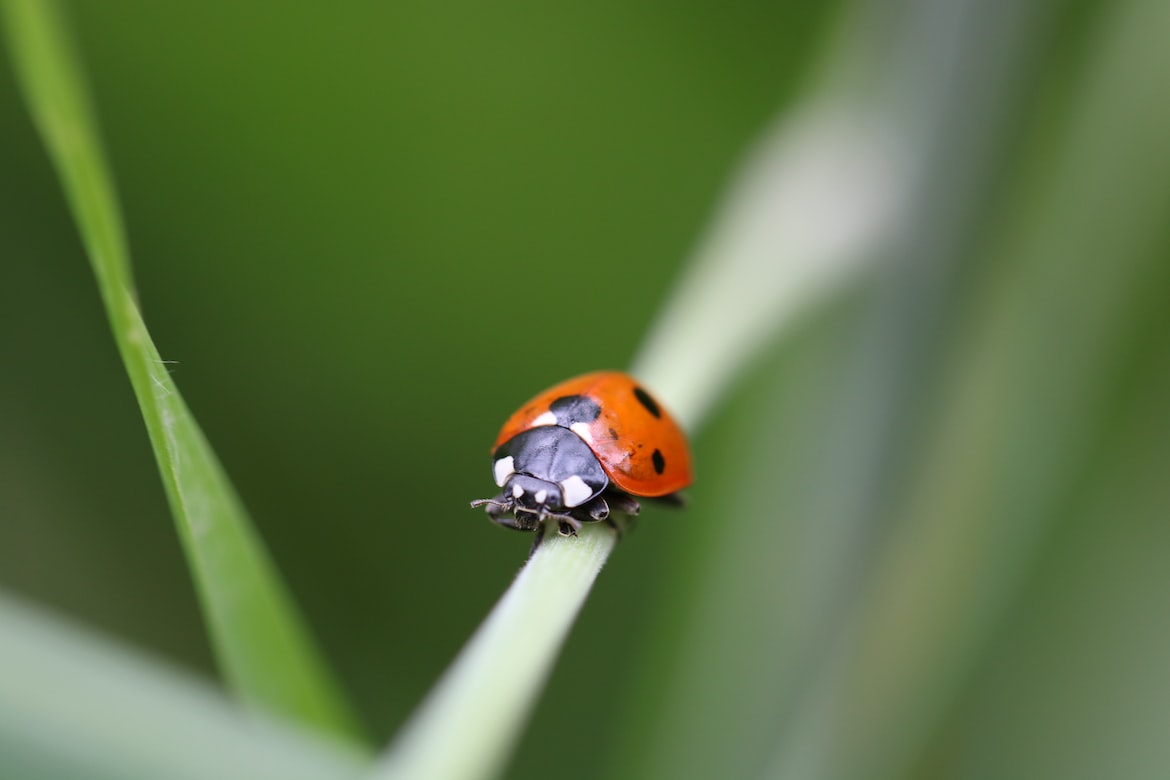 Harmonia axyridis is a highly polymorphic (occurring in many color forms) species. Adults are strongly oval and convex, about l/4 inch long and 3/16 inch wide. North American populations are comprised of co-occurring individuals that range in color from pale yellow-orange to bright red-orange, with or without black spots on the elytra, or wing covers. The head, antennae, and mouthparts are generally straw-yellow but are sometimes tinged with black. The pronotum is similarly straw-yellow with up to 5 black spots or with lateral spots usually joined to form 2 curved lines, an M-shaped mark, or a solid trapezoid. The wing covers are generally yellow-orange in unspotted individuals. In maculate (fully spotted) individuals, each wing cover has 10 black spots: a faint mark behind the scutellum, 2 spots at one-fifth, 3 spots in a semicircle at two-fifths, 3 spots at three-fifths, and 1 spot at four-fifths. These black spots are variously reduced or even absent in some individuals. Larvae are elongate, somewhat flattened, and adorned with strong tubercles and spines. The mature larva (or fourth instar) is strikingly colored. The overall ground color is mostly black to dark bluishgray, with a prominent bright yellow-orange patch extending over the dorsolateral lobes of abdominal segments 1 to 5 on each side.

During cool spring weather, development from egg to adult requires about 36 days or longer. Eggs generally hatch in 3 to 5 days. Larvae feed voraciously for about 12 to 14 days on aphids, scale insects, and other soft bodied invertebrates. The pupal stage lasts about 5 to 6 days. After emergence, adults can live as long as 2 to 3 years under optimal conditions. It is believed that females overwinter unmated, with the majority of the population mating later in the spring. In Japan, H. axyridis is considered primarily an arboreal species and is common on various aphid infested trees and bushes such as maple, walnut, willow, and rose; it is also an important predator of various destructive scales in Japan and mainland China. Harmonia axyridis has also been closely associated with harmful aphids and scales on various nursery, ornamental, and field crops in North America, including Christmas trees, apple, alfalfa, wheat, cotton, tobacco, and small grains. The beetles have been released in Georgia (1978-81) and California and Texas (1994) to control pecan aphids and as a result have successfully reduced the use of insecticides by pecan growers. An adult beetle is capable of eating 90 to 270 aphids per day, and each larva can consume 600 to 1,200 aphids during its development. In New York, these lady beetles have been prevalent on copper beech, honeysuckle, and European spindle tree heavily infested with aphids. Between 1983 and 1986, releases of H. axyridis were made in Connecticut for control of red pine scale (Matsucoccus resinosae) on red pine. In Pennsylvania, this predator has been observed feeding on the balsam twig aphid (Mindarus abietinus) and pine bark adelgid (Piraeus strobi) in Christmas tree plantations, and on aphid-infested apple, birch, cotoneaster, and rose.

Cornell’s Department of Entomology and Cooperative Extension offices received numerous inquiries about H. axyridis in the 1990s, primarily because of its annoying habit of invading houses and buildings in massive numbers. It does so during its search for protected overwintering sites in the fall, and reappears on sunny, warm days in February and March. Although they are primarily beneficial insects, these colorful lady beetles can congregate by the hundreds or even thousands (Fig. 4) on outside surfaces as well as indoors on walls, doors, ceilings, and windows, becoming a great nuisance to home dwellers. The beetles seem to prefer light-colored (particularly white) houses located in open fields. This behavior relates to their natural tendency to fly to rock outcroppings in Asia while searching for overwintering sites. Indoors, the beetles commonly cluster together in a corner of the ceiling and wall. Homeowners may complain about beetles crunching under foot and crawling on their arms, hands, and legs. They can bite if handled carelessly, but the beetles do not sting or carry human diseases. The beetles do not reproduce indoors, nor do they feed on wood, clothing, food, or houseplants. Growers and agriculturalists consider these lady beetles to be biological control agents of the many different soft-bodied insect pests on a variety of crops, including ornamental trees and shrubs, and agricultural crops. Its large, and even explosive, populations are probably caused by the massive abundance of prey (predominantly aphids and scales), apparent lack of competition from native lady beetles, and apparent lack of native natural enemies. Scientists predict that multicolored Asian lady beetle populations will become more balanced when its prey numbers decrease and Harmonia itself falls prey to native natural enemies. Overall, H. axyridis is a welcome addition to the fauna of New York, and it may help reduce farmers' reliance on insecticides to control aphids and other soft-bodied insect pests.
Further sources: Cornell University, Dept. of Entomology, 2144 Comstock Hall, Ithaca NY 14853-2601
Based on a 1996 factsheet by Janet Knodel (IPM Support Group, NYS Agric. Research Station) & E. Richard Hoebeke (Dept. of Entomology, Cornell University); updated 2009 by Carolyn Klass, Senior Extension Associate, Dept. of Entomology, Cornell. Updated 2012 Original version © 1996, Cornell University; produced by Media Services at Cornell University for the New York State Integrated Pest Management Program, jointly sponsored by the New York State Department of Agriculture and Markets and Cornell University.